Note: certain names have been changed to protect the guilty.

I looked out the window. It was Cookie Monster in his cherry red Isuzu Impulse (girl car :-). I grabbed my jacket off the kitchen table, flipped off the lights, and locked up behind me–it was going to be a long night.

We headed west, under the overpass, across the tracks, and through a maze of dimly lit streets to Scott’s house.

Scott, had a modem. Almost all my friends had some type of computer, but a modem and a phone line was elite (even if it was your dad’s modem).

We knocked. Scott answered, and led us to his dad’s den. Door closed, he produced a dot matrix printout with six integers; one per line. While his parents were at work and we were in high school preparing for college and an honest living, the apathetic Apple IIe quietly searched, for numbers. To the untrained eye they were just numbers, but for young pirates to be, they were free long distance.

Cookie knew things, and had a knack for finding things. From his jacket pocket Cookie produced a scrap of paper with a hand written number and a floppy disk. He took the con, inserted the floppy, and powered up the dormant IIe.

The green CRT glow, the stutter of the disk ][, all that was missing was the smell of ozone. Cookie’s slender fingers danced with the agility of an medieval organist; a console jockey with no equal, and in no time…

We were in! An ASCII Express warez hole. To call it a BBS would be a stretch since there were no bulletins. This Hawaiian-based AE had one purpose: the distribution of warez. And we found what we were looking for: Pitfall II.

Convenient stores weren’t conveniently located in the ’80s suburbs. But we had time to kill. It took us nearly 45 minutes to navigate east to 7-11 where we loaded up on sugar and caffeine. Big Gulps in hand, we entered the den, and powered on the CRT.

We had it. But I never booted it up, I didn’t care. This was more fun than any Apple II game could ever be. I was hooked. I had to get a modem. I had to get online. Did people even say that in ’84?

I’m 21, in school, have an apartment, a girlfriend, and a full time job writing ERP/MRP code for a local manufacturing shop. I also have my own BBS, a WWIVnet node, and I agreed to foot the long distance bill (yes, I paid for it myself) to Michigan to bring a feed into my city for the other WWIVnet boards. It was fun while it lasted (about a year). However I actually spent more time not dialing into other BBSes, but into my local university and BBSes that specialized in gateways to The Internet.

Usenet had no equal. I remember when I got my employer its own UUCP feed. I rushed with excitement to the city county building to get my longitude and latitude so that I could complete the registration of my site. The BBS scene had become passé.

But there was something missing, and still missing today: a local, personal face-to-face community. BBS parties and BBQs were awesome, but the best was BBS vs. BBS volleyball. And my board kicked ass every time.

I’m not dead yet… I feel happy! Really, I’d like to go for a walk

Recently I completed watching the circa 2005, three-disc DVD set, BBS The Documentary, and I was surprised that some still carry the torch–flame on! :-) The BBS is not dead–yet.

This documentary will appeal to my generation, my culture, my nerddom, more than any other. The interviews provide firsthand anecdotal experiences and knowledge and they all convey dial-up nerddom very well from its start to its decline.

Google for BBS phone numbers and eventually you’ll find one, perhaps one that’s close to home. And BBS F2F communities still exist; some have grown into ISP communities.

You are going to need a few things:

Most of us 40ish retro geeks, including myself, have moved on. I don’t have a modem or a local BBS number. However I do have an analog phone line because VOIP sucks–a rant for another time. And like billions others I also have a mobile phone that drops calls–I am keeping my analog phone line.

The good news is that you do not need any of the aforementioned to get your retro geek on. Many BBSes have converted from dial-up to telnet. And Age of Reason is one such board.

Age of Reason is a telnet accessible BBS that’s running on an Enhanced Apple IIe, using GBBS Pro as the host software. AoR also features the adventure game Land of Spur, as it was when last run on the Tacoma, WA BBS Dura Europos in the late 80’s. — Gene Buckle

What would a 2400 BPS BBS look like on an Apple II and Apple IIe?

With a few fonts and setup you can come close to the ’80s experience without the actual ’80s tech. I am going illustrate this on my Mac, but something similar should work for Windoze and Linux.

First, you are going to need some fonts. Download PrintChar21.ttf and PRNumber3.ttf, open them up and install them–just double click and install from Font Book. 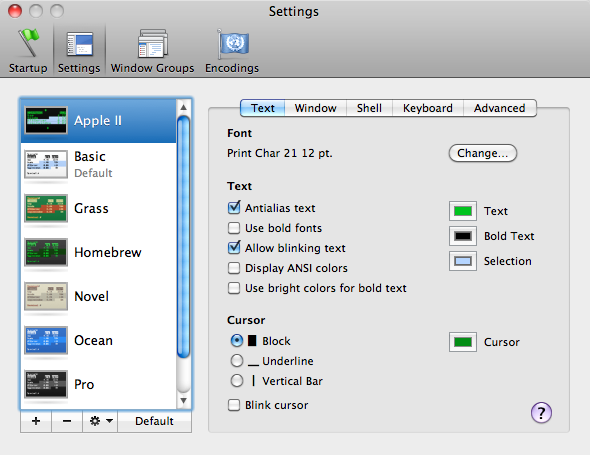 Print Char 21 is an Apple II-esque 40 character/line font. However a keen observer will notice that it produces lowercase letters. A real Apple II was SHOUTING AT YOU ALL THE TIME or worse SHOUTING AT YOU.

The animation at the beginning of this post uses this font. 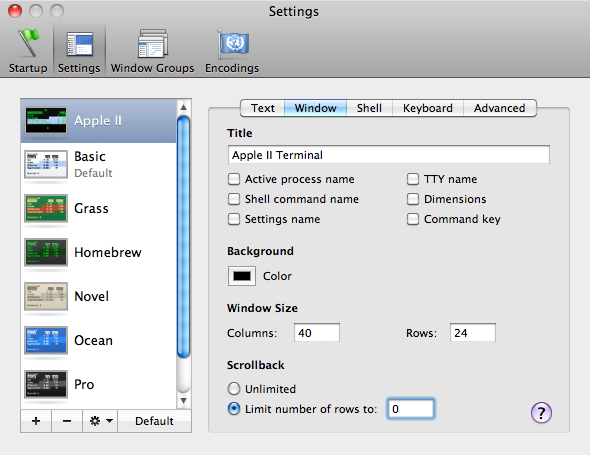 I opted for no scroll back, but it is not required.

After your Apple II and Apple IIe setups ares complete you will need to restart Terminal before your new settings will appear in the Shell/New Windows menu.

If you are an X11 user like myself, then it’s easier, just type:

for 40 or 80 columns respectively. You could get fancy and add -e telnet destination and then add that to your X11 menu so that you can get your BBS on with minimal effort.

BBS: Get your retro on!

Open up a 40 or 80 column retro terminal and type: telnet aor.retroarchive.org, and you should see something like this:

And like all single line BBSes, you will get BUSY signals. Just keep trying. To exit telnet type ctrl-[, then ‘q’, then ‘return’.

The BBS glory days may be over, but their legacy lives on in the form of forums, blogs (where you can still be your own sysop!), and chat rooms. The Internet didn’t create these things, they already existed.